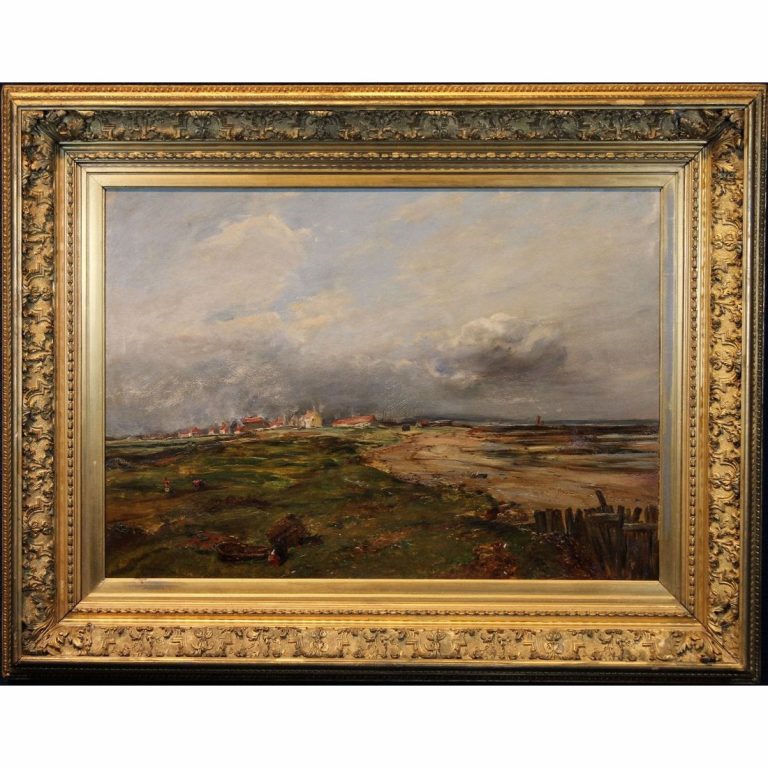 Johannes Hendrick Weissenbruch (1824 – 1903) Large Painting of a Dutch Landscape with an approaching storm in the distance. Signed lower right. Oil on Canvas. Label verso. Provenance: Estate of William R. Hearst: Private collection, San Francisco, California, circa 1950, Bonhams sale (2012). William Randolph Hearst Sr. was an American businessman, newspaper publisher, and politician known for developing the nation’s largest newspaper chain and media company, Hearst Communications. Hearst was renowned for his extensive collection of international art that spanned centuries. Most notable in his collection were his Greek vases, Spanish and Italian furniture, Oriental carpets, Renaissance vestments, an extensive library with many books signed by their authors, and paintings and statues. In addition to collecting pieces of fine art, he also gathered manuscripts, rare books, and autographs. His guests included varied celebrities and politicians, who stayed in rooms furnished with pieces of antique furniture and decorated with artwork by famous artists. Beginning in 1937, Hearst began selling some of his art collection to help relieve the debt burden he had suffered from the Depression. The first year he sold items for a total of $11 million. In 1941 he put about 20,000 items up for sale; these were evidence of his wide and varied tastes. Included in the sale items were paintings by van Dyke, crosiers, chalices, Charles Dickens’s sideboard, pulpits, stained glass, arms and armor, George Washington’s waistcoat, and Thomas Jefferson’s Bible. When Hearst Castle was donated to the State of California, it was still sufficiently furnished for the whole house to be considered and operated as a museum.
Sight Size: 22.5 x 31.5 in. Overall Size: 33.5 x 43 in.