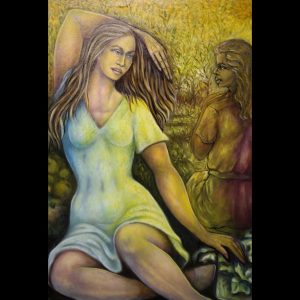 Julio Susana stands as one of the Dominican Republic’s most prominent artists. An entire wing in the Museum of the Dominican Man in Santo Domingo is dedicated to his work. Susana’s paintings vividly manifest a field of reality integrated with the kingdom of magic. In his canvases, one sees the symbolism of Diego Rivera and Frida Khalo.
Internationally acclaimed, Susana’s monumental and visionary work exudes an essential vitality that radiates life. The symbolic and the real coexist, bringing an allegorical quality to his chosen cast of characters. Timeless and dreamlike, Susana’s prophetic art creates an indelible impression upon the viewer. Uniquely honored with an award from the White House for remarkable artistic achievements, Susana’s work continues to garner thunderous acclaim and accolades.